SOMETIMES (JUST SOMETIMES!), “THE MOST PATIENT MAN” IS RIGHT… 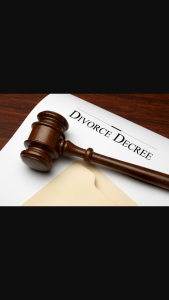 I did something slightly unorthodox. You could even say sneaky. Sneaky is probably more truthful. And now I’m a little bit sorry. But I’m also a little bit not. The kids are happy, which is always the main thing. But I have my sneaky suspicions that “The Most Patient Man” is pricing Divorce proceedings when I’m not looking.

For twelve months straight our eldest has been asking for a pet. We tried the goldfish route but when he couldn’t take him out of his bowl and cuddle him, it didn’t really interest him. All he wanted was a cat. Every day without fail;

“I know he will be my responsibility, if mommy just helps me with the poop I will do everything else”.

And every day for twelve months I have looked to “The Most Patient Man” who refused point blank, over every dead body he could think of….”too much hassle”, “shitting all over the place”, “cost a fortune in vet bills and food and litter”, “It will only end one way…something will happen the fucker and I’ll be consoling you all. I already had to have a funeral for the cuntin’ fish. NO!”.

So me being…..well, me, spotted a genuine opportunity last weekend. “The Most Patient Man” doesn’t go away very often and last weekend he went on a stag. A two day bender which left me to my own devices with 3 unruly boys and nobody to supervise any of us.

They asked once again;

And as I usually do, I turned to look for “The Most Patient Man” and he wasn’t there. And I should never EVER be left in charge of this kind of decision making. But unfortunately for him he handed me the reigns for the weekend.

So I packed them all up and away we went to Heathlawn, the GSPCA rescue centre for cats and dogs, located in Killimor. 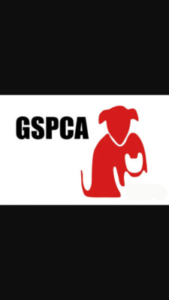 I had spoken with them on the phone before we left and a lovely lady, Trish explained to me they were open 365 days a year so we could come and visit even though it was Sunday and she thought she may have one little guy that might suit a noisy, busy house. When we arrived we got to meet all the lovely kitties these people have rescued and we were introduced to one guy in particular, Casper. A three and half month old black kitten who loved to run, jump, chase and play. I let the kids hang around for a bit and see what they thought and after about a half hour of “Big Bro” and “Baby O” quizzing Trish on food, cat toys, sleeping arrangements and pooping habits, the general consensus was that Casper was coming home with us.

We took him home and settled him in, we had a few scrabs when the boys forgot themselves and put a hand or a foot in the way of his play toy thingy. And Casper and “small fry” are still going through, what I would call …”an adjustment period”….

Baby thinks cat is new cuddly toy. Cat thinks baby is out to kill it … 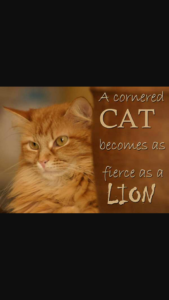 I’m sure they will learn to live together soon. As soon as “Small Fry” realises the cat is not a pony and will NOT take him for a trot no matter how many times he mounts him.

“Big Bro” has his reservations about the much wanted pet since he noticed just how big and sharp his claws are and since observing Casper sharpening them on any available household object. Shudda picked up the blooming scratching post I was looking at! Turns out the only one I had any concern about….”Baby O”…the one with middle child syndrome…..is the only one getting on like a house on fire with the cat. They see each other for a while then give each other some space. Its a mutual understanding which seems to work for them both. “Baby O” requests that the cat be put “Out the back kitchen” when his eating coz he “doesn’t share his food” and so far, they’re on good terms. Cat doesn’t touch “Baby O’s” food and “Baby O” doesn’t touch the whiskas. Sorted! If only I could keep “Small Fry” away from the dried cat food now I would be away with it.

I was unsure how to “introduce”?!? Casper when “The Most Patient Man” returned. Turns out I didn’t have to think too much about it. I had just put the lads to bed and he came stumbling in the door after two days on the piss with the lads, down the hall, into the kitchen, breathless, one eye trying to focus on me, the other eye still looking for me and a finger pointing towards the hall;

“Andy, there’s a fuckin Cat after getting into the house, there’s a cat in the hall, look at the little bastard! Look at him!”

I actually don’t know how he even noticed him as drunk as a lord. Casper is black and the hall was dark.

They were pretty much the only words spoken until he arose some time around midday the next day and mentioned he had a flashback of a cat but it must have been a dream and I had to deliver the blow all over again. 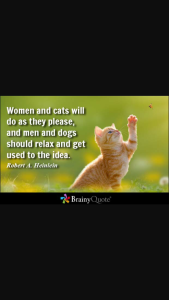 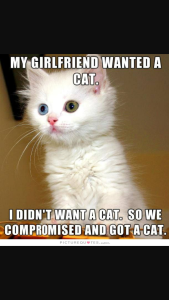 I will say he has been pretty O.K. with everything considering I did it behind his back. Obviously, Casper is here to stay and there is nothing he can really do about it at this stage. I even caught him petting him the other day so he mustn’t think he is all that bad. But I will also say, there are legitimate reasons he refuses these sort of requests from us. Now, as you can imagine, it’s a bit hard for me to admit he can be right, so what I’ll say instead is, he is not always wrong.  I’m having to learn this the hard way.

At the request of the GSPCA, Casper cannot go outside AT ALL for the first two weeks he is with us. Which means he uses a litter box in the back kitchen. And we have put him on new food, which means he is now also a shitting machine. He was already trained to use a litter tray and he is brilliant with it but the boys have managed to lock him out of the back kitchen twice and when he could not get into the litter box he went elsewhere… 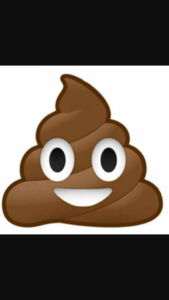 Needless to say, I did a lot of shouting and cursing and could probably be heard by the people in mass whilst “The Most Patient Man” had his moment watching me clean up alone.

Turns out the Cat costs more than a friggin’ child with all it requires so the hole in the purse isn’t helping the “keep the cat” campaign.

He is also stone hatchet mad and we had to get a bell and put it round his neck because he kept sprinting out of nowhere and frightening the bejesus out of everyone. 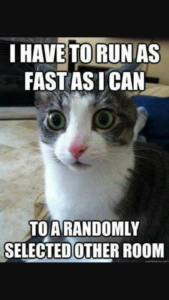 We had a MAJOR incident Saturday night which could have ended up in the eviction of the Cat but I have managed to talk them all around, they forgave him and they love him again. Kind of.

I don’t know about any of the rest of you but in this house, at Christmas, there is always a little trepidation when it comes to a big fat man basically breaking into our home through the chimney. The boys get awful nervous at the idea and as much as they want to grant him entry because they want their presents they also request that they be allowed sleep in our bed so Santa doesn’t come anywhere next to near them while he is visiting. It is the only night of the year this happens and with what I think is quite legitimate reason, so we allow it.

“Big Bro” took it in his head Saturday night (after watching Rise of the Guardians) that he always thought the Easter bunny was tiny but knowing now that he is “Grown Up Human Man size”…. 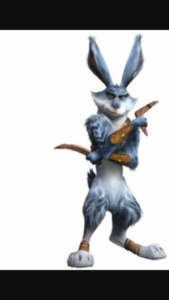 he is now petrified of him coming into the house and he convinced “Baby O” to be scared too and they both wanted to sleep in our bed. I tried all the usual stunts and nothing was convincing them out of their terror so I agreed to the sleepover in mammy’s bed as long as they went straight to sleep and I would follow them up later. Agreed! Reign of Terrorisation stopped when”Big Bro” finally shut up about the scary Easter Bunny man and “Baby O” agreed to calm down.

We put them in our bed, switched the lights out, assured them once again that the Easter bunny just pegs the Easter eggs in the door and stays going because he is so busy trying to get to everyone. We kissed and hugged them and bid them goodnight leaving the door to the darkened room slightly ajar so we could hear if they called.

As it would turn out we would have heard them if we were in the next Town.

“The Most Patient Man” put the baby to bed and left the stair gate open while I was making coffee. He returned and we were just ready to tear into their Easter eggs with our cup of scald when horrified screams started coming from upstairs. Now in all honesty, we actually thought the kids were being slaughtered up there. They gave us the shock of our lives because usually they all fall straight to sleep without a sound. So we drop cups and skirt taking the stairs two at a time and scrambling to switch the bedroom light on to see what the fuck is going on and who was attacking our children, all the while the kids are screaming;

It is the one and only time I will let the 5 year old away with cursing;

“ITS THE FUCKIN’ EASTER BUNNY EOGHAN”

We flick the switch on the wall and flood the room with light only to see the two bigger ones scrambled over the other side of the bed in a ball on top of each other, holding one another for dear life and waiting to see what it was that was after jumping on them in the dark. 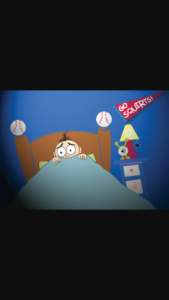 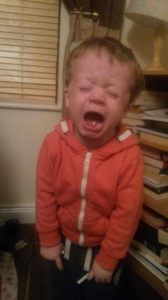 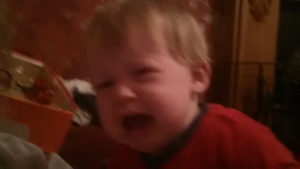 And there is Casper, sprawled out licking himself with nearly a whole double bed to himself. 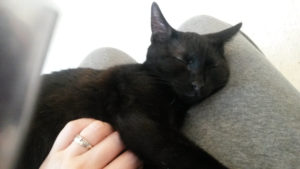 “The Most Patient Man” just gave me the look.

“You and that fuckin’ cat!”

Here’s hoping he survives another week! 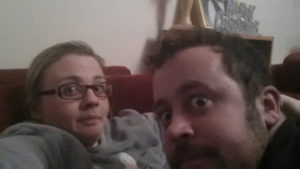